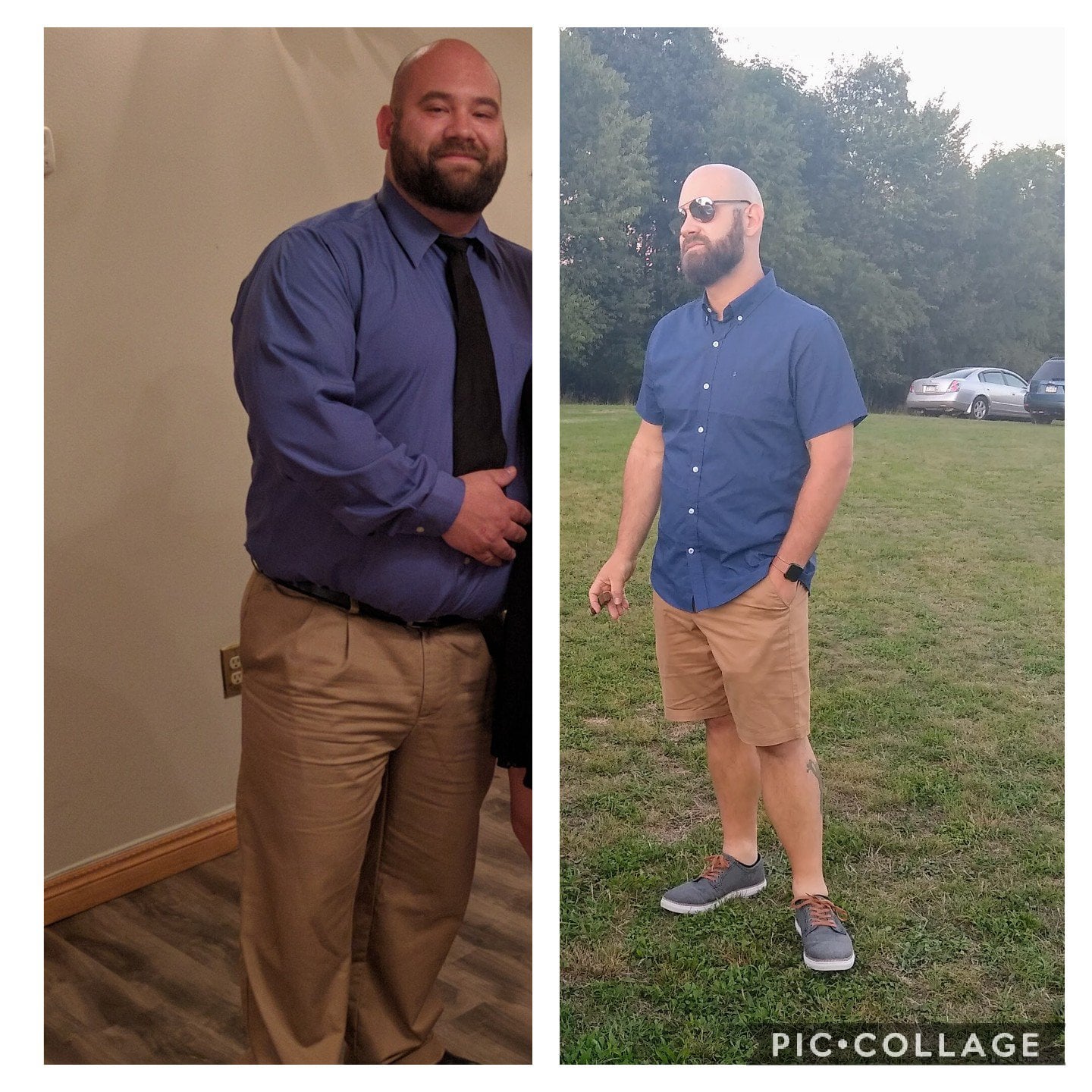 This is a very long one so TLDR: I’ve lost a lot of weight but am still considered overweight for my height (5’10”) however all my friends and family think I’ve lost enough and should go into maintenance mode. I’m not so sure I’m done losing weight.

Picture for reference [Imgur](https://i.imgur.com/tCHSfto.jpg) Before pic is 2017 which was probably my heaviest and after pic was yesterday September 6th.

I’ve a very private person about personal issues but I’ve been thinking about this for a while it has really been getting to me lately and I need to get it off my chest so if you read it Great! and if you don’t that’s ok too I just feel better saying it.

I’ve been overweight for my entire life but I always carried it well (or so I was told). When I was 340+ I obviously knew I was big but friends and family NEVER made me feel it. I tried for years to lose weight here and there and with some success I would drop 20-30 pounds but it always came back. In 2011 I dropped down to 225 but eventually by 2017 I was back to mid 300’s.

My wife has had the same struggles and she was able to get gastric bypass and worked her a$$ off and was able to drop down to 145 and now maintains at 160ish for the last several years. I was unable to get gastric bypass due to me having Crohn’s disease. She has been and continues to be my biggest supporter. She has never ever made my weight an issue in our marriage and love life. Unfortunately in recent years I have had some health issues that my weight has been a big contributor to, not saying it wouldn’t have been this way had I been at a more healthy weight but it would have helped significantly.

For an early Christmas gift last year I bought my wife a Fitbit watch to track her steps and me being a “techie” and liking gadgets I got jealous and bought myself one too. This was the absolutely the best thing I’ve ever done for my health and seeing how active I am as well as using MyFitnessPal to be accountable for my food intake has DRASTICALLY changed my life. All these years of struggling with losing weight wasn’t due to lack of effort it was due to lack of accountability. The old “Yay! I had a good workout I’ll reward my self with a big meal” wasn’t going to fly anymore.

I’ve been a long time member to a local gym since I lost a bunch of weight in 2011 and paid my monthly dues even when I didn’t go for a year + (it was a security blanket of I know I could go whenever I wanted but I rarely made the effort). Anyway with my new found accountability I started going to the gym again in early December 2019 and I wanted my goal to be not only to lose weight but to be able to run a 5K with my wife by my side (she’s been running 5Ks for a while now). When I started I couldn’t run 25 seconds seconds without having to stop but slowly I got better and better and I was losing weight. By February I had dropped almost 40lbs down to ~280lbs. Now I was seeing lots of progress and getting lots of compliments and then we had an 8 week weight loss challenge at work. There was a cash reward for most total percentage lost but it was mostly for bragging rights. I came in 4th place at 10% lost and I felt amazing and was more motivated than ever. While I wasn’t even close to ready my wife and I signed up for a 5K to take place in September 2020 and it would be my goal to be ready by then…then the Pandemic hit and we all started working from home, the gyms closed, and my 5K got canceled.

For most of my coworkers this brought their weight loss progress to a screeching halt and most returned to their pre challenge weights. I however kept it going. My wife and I bought a treadmill and put a TV in the basement and I continued towards my goal of eventually running a 5K by September. While “training” I continued to lose weight and I was starting to get question from friends and family of what weight I wanted to get to and I had no answer for them. I didn’t know so I just said I want to get to a healthy weight and be able to run the 5K start to finish. They would say that’s great but I need to have a real goal in mind. Anyway, I reached my goal of running a 5K from start to finish with zero stopping in late August and by that time I was down to 212lbs. So now I’ve met my stated goal but I keep going, I’m running it faster and sometimes longer and continuing to lose weight.

Today, September 6th, I’m at 206lbs. I feel great! However now my mother-in-law says I look like a toothpick and my wife thinks I should start thinking about going into maintenance mode. I went to a wedding and my friend, the groom, pulled me aside and said I look great but I need to stop losing in a serious but kind of joking manner. Several other coworkers who I haven’t seen since mid March were there and they were amazed and super happy for me and couldn’t stop giving me compliments but would also ask how much more I wanted to lose and I still don’t have an answer for them.

The thing is, I felt better at 280 compared to 300 and better still at 250 compared to 280. I feel better at 206 than I did at 210 and so logic will say I will feel better at 200 than I do at 206 and so on. I almost have visible ab muscles! I know I need to have a goal weight in mind and I know eventually I have to switch to maintenance mode but I also know that 206 is still considered overweight and still borderline obese so why am I getting so much pushback on losing weight? All of the people who have said I should stop have know me and loved me when I was 350lbs so in my mind its just them shocked at the drastic change however a random stranger on the street wouldn’t have the same response. Should I stop losing now even though I know I can still withstand to lose at least another 10 or 15?