Police officers in Seattle are pictured in this December 1918 photo wearing masks made by the Seattle Chapter of the Red Cross during the influenza epidemic.

Click through the gallery to see headlines from the Seattle Post-Intelligencer and photos from the 1918 Spanish flu pandemic.

Police officers in Seattle are pictured in this December 1918 photo wearing masks made by the Seattle Chapter of the Red Cross during the influenza epidemic.

Click through the gallery to see headlines from the

History, no doubt, has a strange way of repeating itself.

Just like during the COVID-19 pandemic, Seattle faced a rigid quarantine that confined residents to their homes, placed bans on large gatherings, closed businesses and ordered wearing masks in public during the Spanish Flu outbreak of 1918.

“In many ways, the Spanish Flu was a forgotten epidemic, as the nation rushed headlong into the Roaring Twenties and tried to forget the bad old days of 1918-1919,” said Leonard Garfield, the executive director of Seattle’s Museum of History & Industry.

But unlike Gov. Jay Inslee’s phased approach to reopen the state county-by-county based on the number of confirmed cases, Seattle’s reopening of society following quarantine in 1918 was abrupt, and consequently saw another deadly wave of the illness in the early months of 1919. The premature easing of quarantine rules led to a resurgence of cases that could have been prevented, and the threat of a second quarantine loomed over the city.

The city-mandated quarantine in 1918 was much like the stay-home orders the city is under today with the novel coronavirus to promote social distancing and slow the spread of the virus. As published in the Seattle Post-Intelligencer on Oct. 6, 1918, these were the health restrictions put into place over the city:

—  There will be no services held in the churches of Seattle.

— All theaters were dark last night and will remain so until the quarantine is lifted.

— The public schools will not open tomorrow.

— The public library will remain closed until further orders.

— All indoor meetings of every kind are prohibited.

— All dances, public and private, are forbidden.

— All entertainment in cafes, restaurants and hotels are prohibited.

— All confectionery stores, restaurants and other businesses not closed are ordered to prevent the gathering of crowds.

Much like Inslee’s stay-at-home order that has temporarily shuttered all nonessential businesses, these mandated closures caused life in the city to come to a grinding halt for many. Businesses were forced to operate during restricted hours, trolley cars had passenger limits, barbers were required to wear gauze masks and many businesses violating orders were threatened with fines and closure. 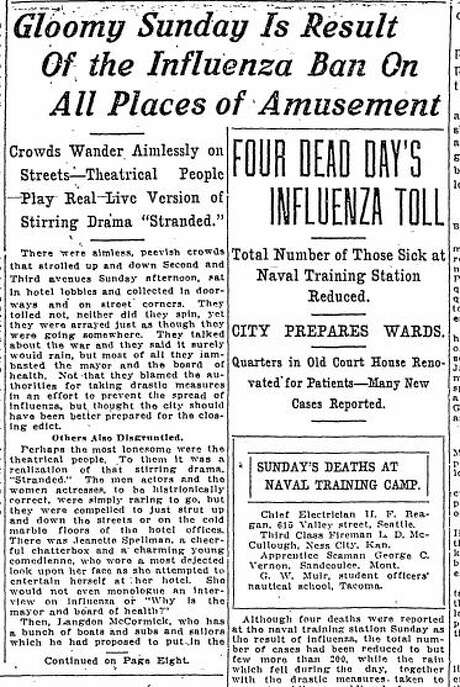 
Once the first cases were confirmed at Camp Lewis, now called Joint Base Lewis–McChord, in Tacoma, Seattle’s Mayor Ole Hanson acted swiftly banned dances and other gatherings on October 5, 1918.

Dr. Thomas Tuttle, the state health commissioner, lambasted those not following the rules: “Some have the impression that their particular pleasure is being interfered with and persist in holding little social functions. People who cannot obey the law made necessary in this emergency will be placed where armed officers can compel their obedience.”

With cases and deaths mounting all throughout October, a mask order was put into place on Oct. 29 to help curb the spread.

“The enforcement was strict and serious — people were cited for spitting, fined for loitering, and prohibited from using mass transit without masks,” Garfield said. “Compliance seems to be high, although in the very early stages some businesses and organizations like theatres and school, were dismayed by how quickly the closure orders came down.”

Writers at the P-I were among those dismayed by how fast these orders came down from city officials after weeks of little action. In a front-page editorial published on the same day as the quarantine rules, the newspaper wrote: “A great harm has been done to the city in its businesses, religious and social relations: but Seattle will quickly and easily pull through ⁠— and without much cause for thankfulness to city officials who did nothing whatever until too late for anything but extreme measures.”

However, the city did largely comply with the orders. Headlines that touted the city’s “amusement ban” suggested empty public places. Cases of the influenza, especially those that started at military camps, began declining in early November as a vaccine was available. It was evident that the forced closures of businesses and ban on gatherings helped contain the disease. 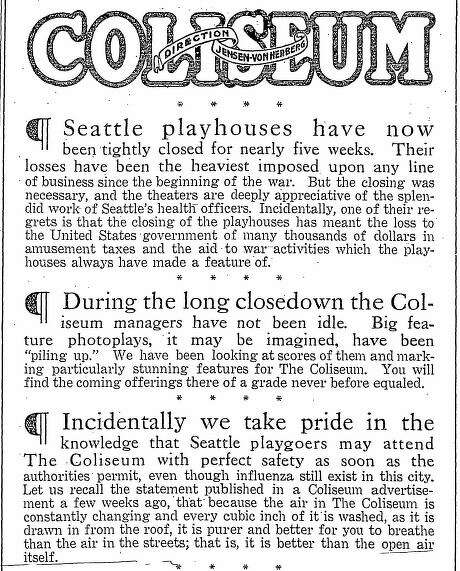 
During this time, all playhouses and theaters were closed.

But those stringent orders were unanimously ceased by all on Nov. 11, 1918: Armistice Day. With the news that a peace agreement had been signed, Seattleites from every corner of the city came out of their homes, unmasked, to celebrate the victory of the Allies.

A P-I article stated: “By 12:30, Second and Third Avenue were crowded with automobiles. Influenza rules were for the time forgotten. No gauze mask was visible in the big crowds and no attempt was made by the police to see that they were. At 1 o’clock the downtown streets resembled a busy Saturday night. Crowds of joyous people filled the walks and a general carnival air prevailed.”

When Mayor Ole Hanson was alerted that people were gathering in the streets to celebrate the end of the war, he replied: “Who could blame them on this occasion? But they should wear a mask.”

The following day, quarantine and mask orders were lifted as cases were declining and city officials were finding that the rules were impossible to enforce. People resumed their daily lives, with many going to the now-opened theaters for much-needed entertainment.

A P-I article published just two days after the Armistice explained the city’s film phenomenon after quarantine: “When the movies opened at 11 o’clock, there was a crowd at each kiosk waiting to greet the ticket girl, and when they closed last night fans were still unsatisfied. By noon yesterday, the movies were warning patrons of standing room only, and by 7 in the evening lines two-deep stretched a block from the entrances.”

“The spirit of the nation was one of weariness,” Garfield said. “Which is why when the Armistice came in November 1918, it was a cause of great celebration, which of course precipitated yet another round of flu.” 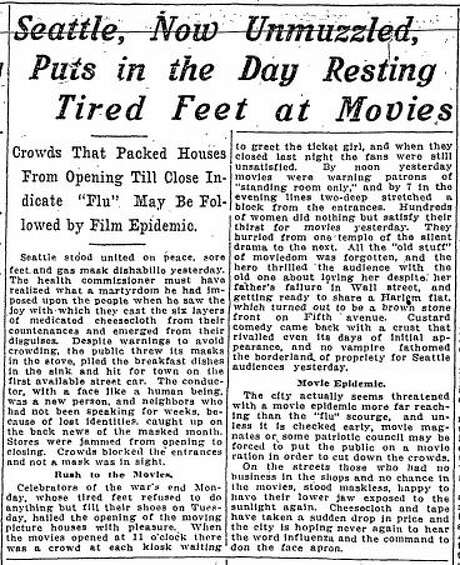 
No longer under quarantine and masks orders, Seattleites resumed life as normal, with many going to the movie theaters for entertainment.

The virus had not disappeared as citizens had hoped; premature easing of those restrictions led to a second, smaller wave of the illness later in December.

Just as many defied the city’s original rules, residents were weary of another quarantine and shutdown of business. In an editorial warning about the resurgence of cases published on December 3, 1918, P-I writers expressed the city’s attitude of defiance towards further quarantine orders: “It isn’t the flu that’s feared so much as it is another access of regulative zeal. Seattle should serve prompt notice on the health officials that no suggestion of another shutdown of business and revival of the mask will be tolerated.”

Luckily, the second wave was much less deadly as the city was able to quickly isolate and quarantine those who were ill. By March 1919, six months after the first reports of the disease in the region, there were no reported deaths.

Historical sources estimate that the Spanish flu claimed almost 5,000 lives in Washington by the end of 1919. By comparison, it has been just over 5 months since the first-reported case of COVID-19 in the Evergreen State, and deaths have reached over 1,000.

After nearly 10 weeks of stay-home orders, Seattleites are chomping at the bit to leave their homes, but a look towards the past shows that reopening too soon and too recklessly runs the risk of a deadlier second wave of illness.

If the history of the city provides one lesson, it’s that patience is the best way to beat a pandemic once and for all.