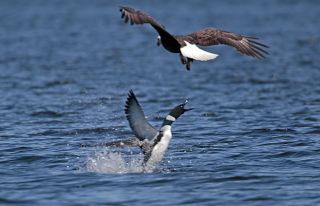 In a separate incident from the one described here, a loon launches out of the water to scare off a bald eagle on Bow Lake in Northwood, New Hampshire.

A bald eagle likely thought that grabbing a tiny loon chick would be an easy meal.

After the eagle wrapped its talons around the chick, another loon — possibly the chick’s parent — stabbed the eagle in the heart with its “dagger-like bill,” killing the American mascot in one fell swoop, according to Danielle D’Auria, a wildlife biologist at the Maine Department of Inland Fisheries & Wildlife.

Related: In photos: Birds of prey

This is the only documented case of a loon — aquatic birds that belong to the genus Gavia — killing an eagle by stabbing it in the chest, D’Auria wrote in a May 18 blog post for the Maine Department of Inland Fisheries & Wildlife.

However, it wasn’t immediately clear what had killed the bald eagle (Haliaeetus leucocephalus). D’Auria learned that a bald eagle carcass and a dead loon chick (sadly, the loon chick did not survive) had been found at Highland Lake in Bridgton, Maine in July 2019. It’s a criminal offence to kill a bald eagle, so Neal Wykes, a game warden in Maine, brought the dead bird to the nearby Norway Veterinary Hospital for a radiograph, which would reveal whether the eagle had been shot.

But it wasn’t a bullet that had killed the eagle. As D’Auria wrote in the blog, “No metal showed up on the image, but during the external exam a puncture wound on the eagle’s chest was discovered.”

D’Auria suspected that an adult loon had stabbed the predator, perhaps in an “attempt to protect its chick from the eagle,” she wrote in the blog. “A loon’s best weapon is its dagger-like bill, and it will often attack adversary loons by coming up from beneath the water’s surface with its bill straight towards the other loon’s sternum, or chest.”

These loon-on-loon fights are so common, many adult loons have several, healed puncture wounds on their chests, she noted. What’s more, the number of bald eagle and loon conflicts has soared in recent years, as the eagle population has recovered from its endangered status. Now, hungry bald eagles are targeting loon chicks and even adults for a quick meal, she said.

Normally, dead eagles are sent to the National Eagle Repository in Colorado, so that their remains can be given to Native Americans for ceremonial purposes. But the “whodunit” question was so intriguing, that D’Auria and her colleagues got special permission from the U.S. Fish and Wildlife Service to send this particular eagle to the National Wildlife Health Center in Madison, Wisconsin, so it could be necropsied (an animal autopsy).

“Sure enough, the pathologist who examined the eagle and loon chick in the lab called me shortly afterward to tell me it indeed looked as though the loon was the culprit in this eagle’s death,” D’Auria wrote in the blog.

The puncture wound in the eagle’s chest was similar to the size of a loon’s bill. It went straight to the eagle’s heart, indicating that the bird of prey had a quick death, she said. Moreover, the loon chick had puncture marks on its body that had the same spacing as an eagle’s talons.

There weren’t any human witnesses during the deadly attack, but a woman in a nearby cabin said she heard a “hullabaloo” the night before that sounded like agitated loons.

“You can use your imagination to formulate how this all played out on Highland Lake that late July evening,” D’Auria concluded.